By GBSA Webmaster20/09/2018
You are here > GCMA > Insights > The Infrastructure Footrace: Why the Middle East is Moving at a “World First” Pace

When looking at infrastructure markets throughout the world, a common word we used for our first two geographic focuses (the United States and Europe) was “Stuck”. This is not the case with the Middle East.

How have they been investing in Infrastructure?

As can be seen below, the Middle East has been spending more in Infrastructure development (airports, ports, roads, water etc.) in comparison with US and Western Europe.

Traditionally, the Middle East has been a trading region and this has continued with the development of the Port of Jebel Ali which is owned by DP World[1], which has become the largest port between Rotterdam and Singapore.  Additionally the region has developed major transportation assets with four airports with over 20 million passengers a year each.  Dubai International Airport is a major hub airport and handled over 88 million passengers in 2017 as well as over 2.65 million tons of cargo.  However, the political relationship between the various countries in the Middle East has created international geo-politics uncertainties which can temper trade.

Does the Middle East need to build more Infrastructure?

Substantial investment flows into Dubai’s and Abu Dhabi’s transport, energy and tourism sectors will drive robust growth in the UAE construction sector over the coming decade. There is now political will in the region to drive forward new legislation to help privatization and a range of public private partnerships (PPPs) to facilitate the use of long term private financing to underpin a large proportion of capital projects. The Railways will be a major development in the Region. 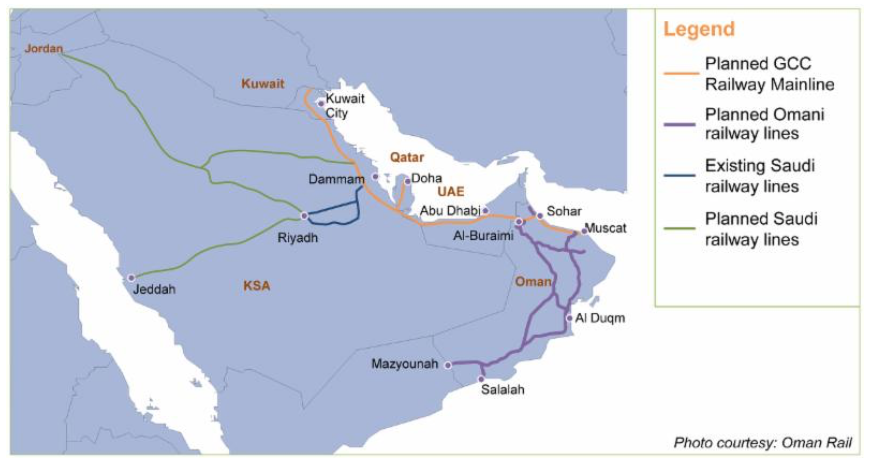 Further proof of the pull of infrastructure in the Middle East comes in the World Expo 2020, which will be hosted by Dubai. The primary reason Dubai was chosen? Location, location, location! Other reasons include logistical efficiency and ease of access for visitors and participants. The Expo site covers 4.38km2 is located in the Dubai South District, halfway between Abu Dhabi and Dubai. It will be served by three international airports (with the new multiple runway Al Maktoum International Airport only six km away), a world-class road network and a new extension to the Dubai metro system (which only started operations in 2009).

Can the Middle East’s economy move on from the ‘Oil & Gas’ lifeline?

The short answer appears to be “not at this time”. The Middle East economies are still very much dependent on Oil and Gas; despite the low oil prices they will see some of the most notable acceleration in real GDP growth. Oil prices have a substantial impact on public spending for these countries, feeding through to infrastructure development as well as improved household purchasing power through government spending on wages and subsidies. They have been diversifying their economies to be less dependent on oil and gas. On the other hand, investment in the oil and gas industry continues to exceed other sectors.

Historically, the region relied upon attracting foreign partners to help develop their hydrocarbon businesses as well as build infrastructure. However, the regional geo-politics has, over time, impacted strategic foreign investors interest.  With regard to foreign funding, the chart displays the bigger portion of GDP from FDI in the UAE when compared to other Middle Eastern countries. In the region FDI have not seen substantial growth in the last few years. 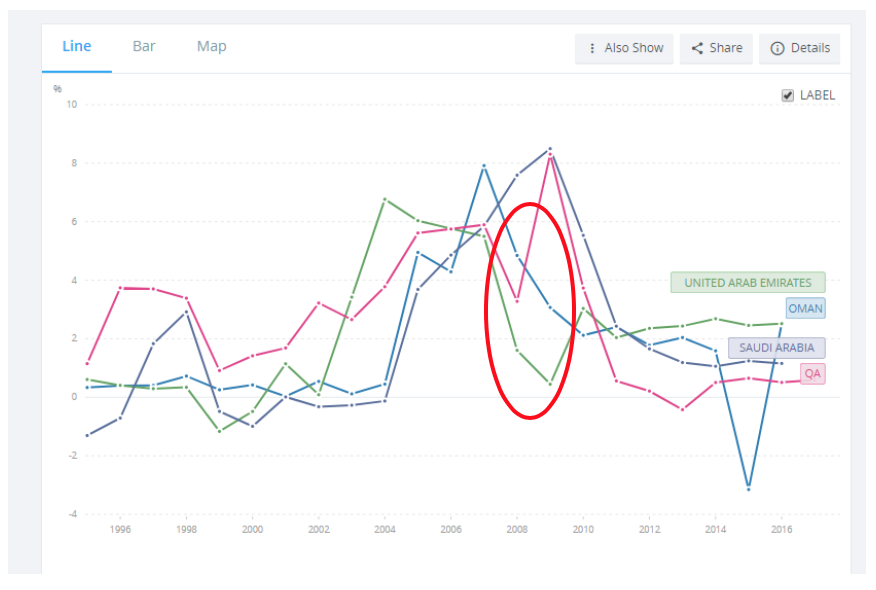 A new form of recycling finance was seen last year with the $3.1bn bonds for Abu Dhabi Crude Oil Pipeline LLC[2] as the financing was raised on an existing infrastructure asset and the anticipation that the proceeds used for investment in new infrastructure.

Other examples of the Middle East being at the forefront of building world class infrastructure is the Qatar LNG facilities, which is the largest such facility in the world (Ras Laffan[3]) as well as the innovative, namely the World and Palm Jebel Ali.

If a much talked about Hyperloop is going to be built anywhere, it will be between Abu Dhabi and Dubai.  The first prototype of the pods that will transport passengers from Dubai to Abu Dhabi in just 12 minutes (1200 km/h) has been unveiled. The vehicles could be launched as soon as 2020. Another broader development that will inevitably have a meaningful effect on infrastructure globally is driverless cars. Dubai has begun testing autonomous pods in a trial run and aims to make 25% of daily transportation self-driven.

The evolution of infrastructure in the Middle East is very striking compared to the pre- Oil and Gas developments in the mid 1960’s. Diversifying away from hydrocarbon revenues and building the tourism sector, developing other technologies and businesses (airport hubs, etc.), using economic fee zones and constructing many iconic buildings like the Burj Al Arab and Burj Khalifa has helped to diversify the Middle East’s economy. The region continues to invest in major Infrastructure at a pace well ahead of the Western Economies even after the global financial crisis over a decade ago lowered hydrocarbon revenues.  Exciting plans for additional Infrastructure development in the future and this includes railways, development of new mega cities in the region and they are likely to follow on from their “World Firsts”.

Ian Dixon is a Managing Director, Global Infrastructure Group at Fitch Ratings which is a member of The Gulf Capital Market Association.

A warm welcome to the GCMA site

In order to serve you better we have two questions: